This February, during our hunting efforts for threat actors using VBS/VBA implants, we came across MS Excel droppers that use hidden spreadsheets and VBA macros to drop their first stage implant. The implant itself is a VBS script with functionality to collect system information and execute arbitrary code sent by the attackers on the infected machine.

Although these intrusion sets may appear similar to the new MuddyWater first stage VBS implant used for reconnaissance and profiling activities, which we described recently in a private report, they have slightly different TTPs and wider targeting. To date, most of the known victims are located in the Middle East, but there are also targets in other regions. Various industries are affected by this campaign. The main focus is on government and diplomatic entities, though we also noticed an unusual targeting of law firms and financial institutions.

We attribute this campaign with high confidence to an actor named WIRTE, which is a lesser-known threat actor first publicly referenced by our colleagues at Lab52 in 2019. We further suspect, with low confidence, that the WIRTE group has relations with the Gaza Cybergang threat actor.

In the instances we have observed, the threat actor sent spear-phishing emails, luring the victims to open a malicious Microsoft Excel/Word document. The Excel droppers observed in all instances were using Excel 4.0 macros – a technique that uses formulas in hidden spreadsheets or cells that execute macro 4.0 commands – to drop malware that in our particular case was named Ferocious dropper. The Word droppers were using standard VBA macros to download the payload. The actor tailored the decoy contents to the targeted victims, using logos and themes relevant to the targeted company or using trending topics from their region and, in one instance, even mimicking the Palestinian authority.

However, in some cases we saw a fake ‘Kaspersky Update Agent’ executable acting as a dropper for the VBS implant. We were unable to confirm if this PE file was also distributed through email or downloaded by the threat actor after some initial penetration, but our analysis shows it has the same execution flow as the Excel 4.0 macros.

This first stage implant is composed of VBS and PowerShell scripts. The actor used some interesting new techniques in the dropper’s execution flow. Below, we break it down into three parts:

The implant is a small PowerShell script that acts as a downloader and secondary stager used to execute commands provided by its C2, and possibly download and deploy further malware.

This script is able to connect with the embedded C2 domain using predefined HTTP settings such as a unique User-Agent:

Interestingly, and across the different incidents we observed, the “rv” field of the user agent has changed. In the example above, it is FTS_06. However, we have seen more than 10 variations (listed in the IoC section). We suspect these are used to track intrusions.

If the connection to the C2 server is successful, the script parses the output and invokes it using IEX. The script sleeps for a random number of seconds between 60 and 100 after each attempt to reach the C2. If the threat actor succeeds in establishing C2 communications using LitePower, further payloads containing system commands are sent back to the victim in the form of PowerShell functions through HTTP GET requests, and the command results are sent back as HTTP POST requests to the C2 server. The GET requests will be parsed by LitePower and invoked using PowerShell’s IEX function.

The threat actor initially conducts system reconnaissance to assess the AV software installed and the user privilege. This is followed by the creation of a legitimate scheduled task to trigger “Scripting.Dictionary” COM programs; this will become the cornerstone that allows the persistence to work using the COM hijacking technique and the registry keys added during the installation phase described above. 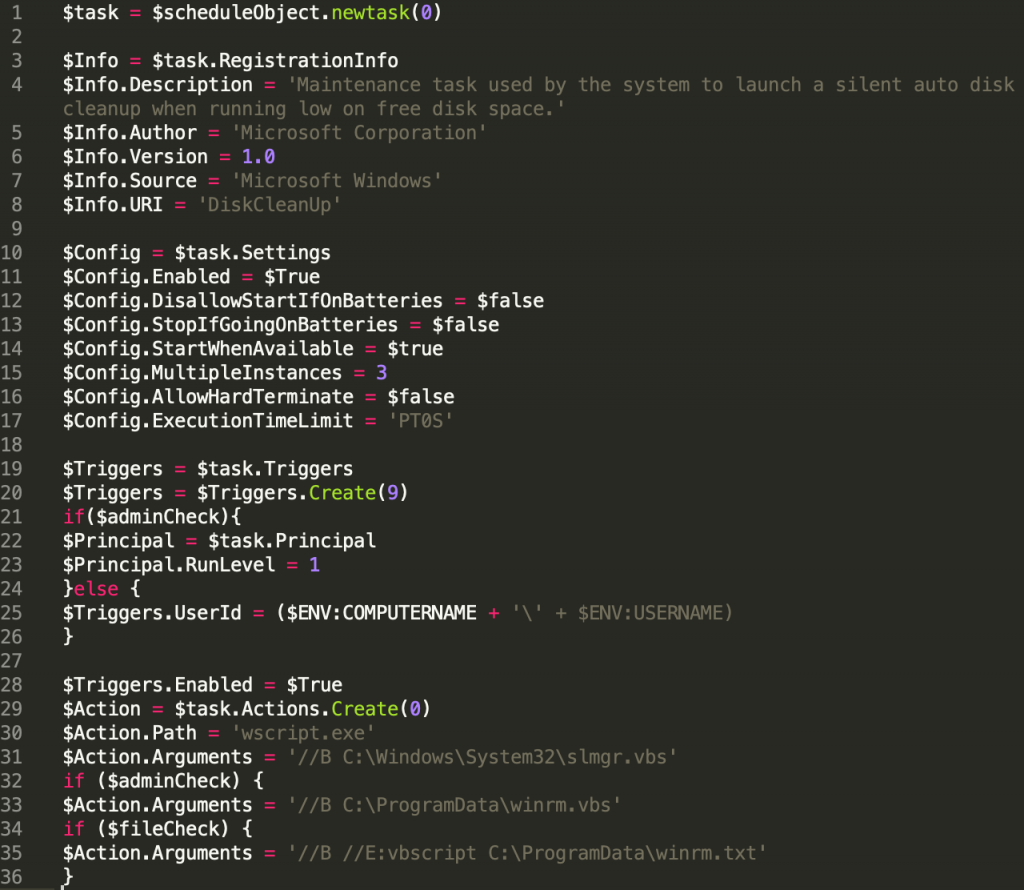 The commands observed during the different intrusions are summarized below:

Additional long functions that we observed can be summarized as follows:

In our initial sample analysis, the C2 domain we observed was stgeorgebankers[.]com. After conducting pivots through malware samples, we were able to identify multiple C2 domains that date back to at least December 2019. These C2 domains were occasionally behind CloudFlare to obscure the real C2 IP address. Thanks to collaboration with our partners, we were able to gather some of the original C2 IP addresses, which allowed us to discover that the servers are hosted in Ukraine and Estonia. 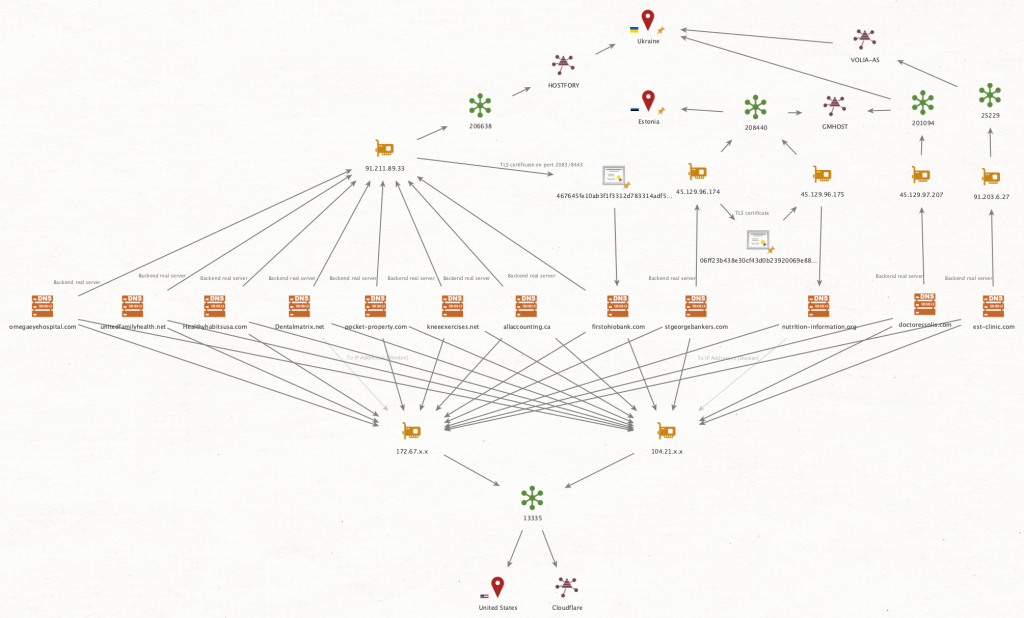 By looking for more machines presenting identical TLS certificates, we were able to identify additional domain names and IP addresses. Interestingly, the server mapped to kneeexercises[.]net listens for incoming HTTPS connections on several ports and uses common names seen on other C2 domains. For example, ports 2083 and 8443 had CN firstohiobank[.]com, and TCP port 2087 had a TLS certificate with the common name dentalmatrix[.]net. We observed use of these non-standard ports during some of the older intrusions, while the newer ones mostly use port 443.

Our telemetry indicates that the threat actor has targeted a variety of verticals including diplomatic and financial institutions, government, law firms, military organizations, and technology companies. The affected entities are located in Armenia, Cyprus, Egypt, Jordan, Lebanon, Palestine, Syria and Turkey.

We assess with high confidence that the intrusions discussed here are associated with the WIRTE threat actor group.

We see the same theme being followed in the intrusions discussed in this report. Both old and new intrusions leveraged VBS and PowerShell in similar ways to stage additional tools and communicate with the C2.

The snippets above also show the custom user-agents. Although the old intrusions had them encoded, the intrusions explored in this report had them in plain text. In both cases the adversaries identified separate intrusions by changing the “rv” field.

The C2s in both cases were protected by Cloudflare, and the real VPSs were under ASNs primarily in Ukraine (e.g., ASN 201094).

In the Lab52 post, the author described the use of a defense evasion and living-off-the-land (LotL) technique using regsvr32.exe, whereas in the intrusions explored in this report, the threat actor used another LotL technique such as COM hijacking. In both cases, the working directory is %ProgramData%.

All in all, we believe that all these similarities are a strong indication that the attacks described in this report were conducted by the WIRTE threat actor.

We assess with low confidence that WIRTE is a subgroup under the Gaza Cybergang umbrella. Although the three subgroups we are tracking use entirely different TTPs, they all occasionally use decoys associated with Palestinian matters, which we haven’t seen commonly used by other threat actors, especially those operating in the Middle East region such as MuddyWater and Oilrig.

WIRTE operators use simple and rather common TTPs that have allowed them to remain undetected for a long period of time. If our assessment of associating WIRTE with Gaza Cybergang proves to be correct in the future, it may signal a change in the group’s motivation. Gaza Cybergang is politically motivated and therefore primarily targets governmental and political entities; it is unusual for such groups to target law firms and financial institutions. Despite the targeting of these latter spheres, the majority of victims still fall within the government and diplomatic categories.

WIRTE modified their toolset and how they operate to remain stealthy for a longer period of time. Living-off-the-land (LotL) techniques are an interesting new addition to their TTPs. This suspected subgroup of Gaza Cybergang used simple yet effective methods to compromise its victims with better OpSec than its suspected counterparts. Using interpreted language malware such as VBS and PowerShell scripts, unlike the other Gaza Cybergang subgroups, adds flexibility to update their toolset and avoid static detection controls.

Whether WIRTE is a new subgroup or an evolution of existing Gaza Cybergang subgroups, we see them expanding their presence further in cyberspace by using updated and stealthier TTPs. In the near future we expect them to continue compromising their victims using the TTPs discussed in this report.

Cybersecurity spending trends for 2022: Investing in...