Top Posts
Unpatched VMWare Vulnerability Used by Hackers to Target...
Linux Variant of Clop Ransomware Spotted, But Uses...
What CISOs need to know about the renewal...
Zero Trust Can Guarantee the Future of Computer...
MKS Instruments falls victim to ransomware attack
North Korean Hackers Make Record For Most Crypto...
What web beacons are and how they are...
Russia-linked Lockbit ransomware hacking gang threatens to publish...
Suspect in Vastaamo hacking arrested in France
Why hackers are attacking healthcare more frequently?
Home Vulnerability How This Indian Language Character Can Crash Your iPhone and Mac
Vulnerability

How This Indian Language Character Can Crash Your iPhone and Mac 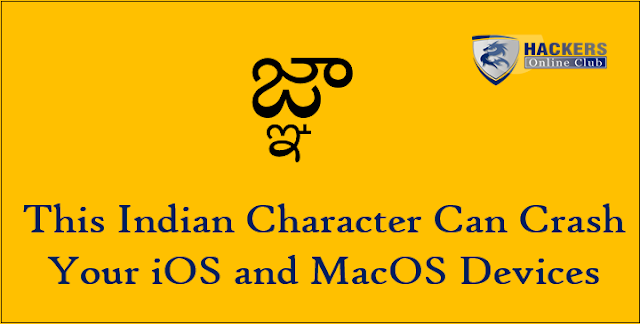 Hackersonlineclub (HOC) has tried testing the code at the time of writing this article but we were not been able to reproduce any crashes but found that iOS device was slowing down while opening an email which contains this character.

This character affects iMessage, Facebook and WhatsApp apps. Even if it is just pasted on Chrome or Safari browser, it gets crashed.

For example, if that character is being sent to your iMessage, it can crash your messaging app across Mac and iOS devices.

The impact of this issue is still there on certain apps running on latest version of iOS, macOS and watchOS. Some of the users were also complaint that Twitter app is also affected in the Apple devices.

If the character is displayed within an application (WhatsApp, Twitter, etc.), the app in question will crash and will continue to close each time you try to start it. The situation gets worse if someone sends you the symbol and iOS tries to show it in a notification : in this case, the entire Springboard (i.e. the system software that manages the Home) crashes.

If this happens, wait and hope that the Springboard will restart properly, because if you force a reboot of the device, it will bootloop.

Currenty, Apple is facing many security issues and bugs. If your iOS device is still affected with this issue then just go to this link here and upgrade to iOS 11.3 or macOS 10.13.4.