According to a recent report from Forescout Vedere Labs, numerous operational devices from the following ten vendors are riddled with OT:ICEFALL vulnerabilities. The researchers named the flaws “Icefall” after the second stop on Everest after Base Camp.

Regarding the vulnerable devices and vendors, the researchers have shared the following list. It mentions only nine vendors, as the tenth vendor exposed to four vulnerabilities is still under disclosure.

The researchers have shared a detailed technical report sharing their analysis. Briefly, they discovered 56 different vulnerabilities that predominantly fall into the following categories. 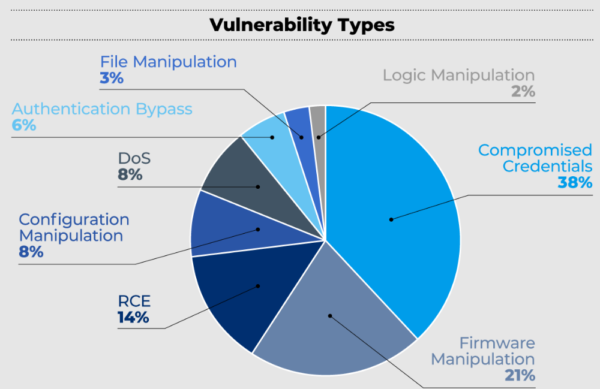 These “insecure-by-design” vulnerabilities demand utmost attention since the criminal hackers are always searching for such bugs to compromise industries via malware, such as TRITON, Industroyer2, and others. As stated in their post,

Abusing these types of insecure-by-design, native capabilities of OT equipment is the preferred modus operandi of real-world industrial control system (ICS)… These vulnerabilities, and the proven desire for attackers to exploit them, demonstrate the need for robust, OT-aware network monitoring and deep-packet-inspection (DPI) capabilities.

The vulnerable devices affect the industrial control systems globally. Hence, industries must scan their infrastructure to detect the existence of vulnerable equipment and patch the bugs. Some mitigation strategies that researchers recommend include,

Moreover, the researchers also highlight the significant drawback of certifying insecure-by-design products that can impart a false sense of innate security. Thus, businesses must try their best to procure secure-by-design products. At the same time, vendors should input maximum efforts toward product security. Together, all entities must work towards developing an environment focusing on “robust” instead of “merely functional” security controls.

Hundreds of Websites and Piracy Apps Seized in US-Brazil’s Operation 404.4

8 tips to secure printers on your network

What are phishing kits (phishkits)?