A modular visual interface for GDB in Python.

This comes as a standalone single-file .gdbinit which, among the other things, enables a configurable dashboard showing the most relevant information during the program execution. Its main goal is to reduce the number of GDB commands issued to inspect the current program status allowing the programmer to focus on the control flow instead.

By default the dashboard is displayed in the GDB terminal but the -output command of both the dashboard and modules can change this behavior. When the output of a module is not specified then the global output is used.

Display the whole dashboard in another terminal

It may be useful to move the dashboard to another terminal so the main terminal can be used exclusively for GDB commands and target I/O.

Display the whole dashboard in a web browser 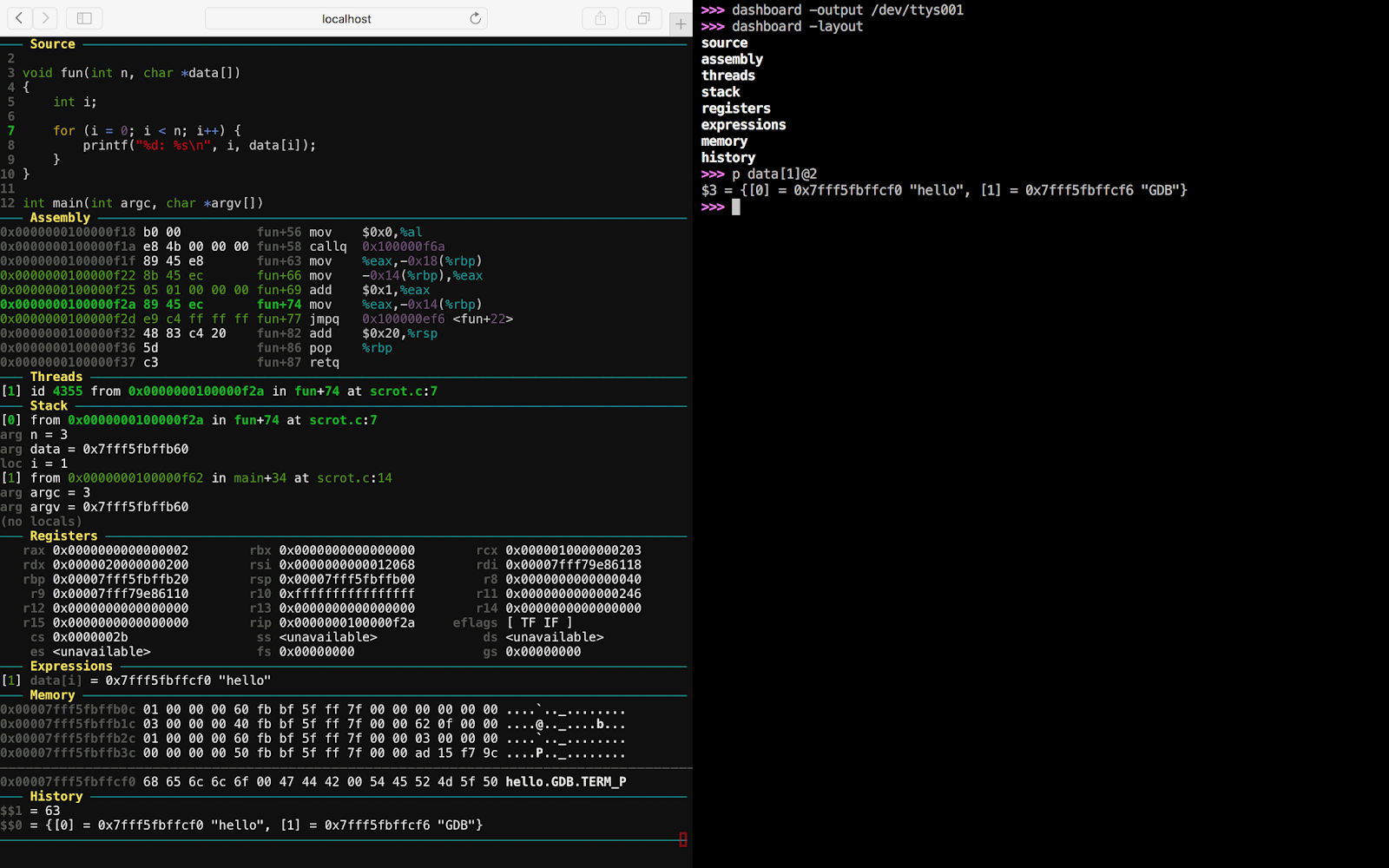 Pushing this even further, one could use a web browser as an auxiliary terminal using gotty. Of course, using the method described above, one can also display the output of individual modules in one or more web browser instances.

The GDB documentation is available at help dashboard. Just like any GDB command, abbreviations are possible, so da, dash, etc. all resolve to dashboard.

This is the root command and it is used to manually redisplay the dashboard.

Display and optionally write to <file> the current configuration (layout, styles, outputs). This command allows to configure the dashboard live then make the changes permanent, for example:

By default the dashboard is written to the GDB console but it is possible to redirect its output to a file or even to another terminal. If the target is a valid terminal TTY then its width is used to format the dashboard, otherwise fall back to the width of the main GDB console.

Without argument reset this setting to the default.

Enable or disable the automatic display of the dashboard whenever the target program stops. The dashboard is enabled by default and even when it is disabled, it can be manually displayed with dashboard.

Sometimes it may be convenient to redraw the dashboard even if the target program has not changed its execution status, for example when the programmer switches the currently selected frame with the up or down commands. It is possible to do so by setting up some GDB hooks in the user-defined init file, for example:

By default, all the modules are enabled and placed within the dashboard in alphabetical order. As the number of modules grows, it is important to decide which modules will be part of the dashboard, and where.

Each directive is in the form [!]<module>, when the ! is present then the corresponding module is disabled by default. The order of directives denotes the display order within the dashboard. For example:

Modules which do not appear in the list are disabled and placed after the last element in alphabetical order.

When executed without arguments, this command lists all the available modules in the form of a list of directives followed by the status of the output files of the modules.

The argument is parsed as a Python literal and converted to the proper type.

When only the name is specified this command shows the current value, whereas without arguments prints all the attributes.

If a module declares some stylable attributes then the command dashboard <module> -style will be available. Its functioning is equivalent to the dashboard -style command but it does apply to a module.

Files in ~/.gdbinit.d/ are executed in alphabetical order, but the preference is given to Python files. If there are subdirectories, they are walked recursively. The idea is to keep separated the custom modules definition from the configuration itself.

The alternative is to hard code changes in the provided .gdbinit, to do so just add new modules and GDB settings under # Default modules and # Better GDB defaults respectively.

GDB natively support the auto-loading of .gdbinit files, this can come in handy to set up a different dashboard style according to the current project type (e.g., C++ development, reverse engineering, etc.). This feature is disabled by default for security reasons. To enable the auto-loading everywhere in the file system add this line to the main configuration file:

There is number of attributes that can be used to customize the aspect of the dashboard and of its modules. They are documented within the GDB help system. For what concerns the dashboard itself it can be reached with:

Colors and text styles are specified using ANSI escape codes. For example setting a style to 1;31 will produce ^[[1;31m, which will result in displaying the text red (31) and bright (1). The ANSI output can be disabled by setting the ansi attribute to False (note that this will not affect the command prompt).

When the ansi attribute is set to True the Pygments Python library may be used by modules to provide syntax highlighting of the source code.

The syntax_highlighting stylable attribute is a string which defines the Pygments style to use.

The list of all the available styles can be obtained with (from GDB itself):


To conveniently cycle through and try each available style (press Return to try the next style and Ctrl-D to exit):

A divider is basically a terminal-wide horizontal line with an optional label. Primary dividers are those used to separate the modules, whereas secondary dividers may be used inside modules to logically separate different sections. When a section or module is empty then the styles used for the divider are those with the off qualifier.

These are general purpose ANSI styles defined for convenience and used within the default modules.

The idea of custom modules is that they provide ways to access readonly information from the target program status; it is safe to assume that they will be queried during the program execution only.


Custom modules must inherit the Dashboard.Module class and define some methods:

The name of a module is automatically obtained by the class name.

Modules are instantiated once at initialization time and kept during the whole the GDB session.

Optionally, a module may include a description which will appear in the GDB help system by specifying a Python docstring for the class.

The name of a module is automatically obtained by the class name.

Modules are instantiated once at initialization time and kept during the whole the GDB session.

Optionally, a module may include a description which will appear in the GDB help system by specifying a Python docstring for the class.

Optionally, a module may declare subcommands by defining the commands method returning a dictionary in which the key is the command name and the value is another dictionary:

A number of auxiliary common functions are defined in the global scope, they can be found in the provided .gdbinit and concern topics like ANSI output, divider formatting, conversion callbacks, etc. They should be more or less self-documented, some usage examples can be found within the bundled default modules.

Default modules already provide a good example, but here is a simple module which may be used as a template for new custom modules, it allows the programmer to note down some snippets of text during the debugging session.

To use the above just save it in a Python file, say notes.py, inside ~/.gdbinit.d/, the following commands (together with the help) will be available:

There are basically two options to work around this:

finally load it when needed from the GDB shell:

RootHelper – A Bash Script that Downloads and...

KillChain – A Unified Console To Perform The...